This collage depicts the architecture from 14 locations with 21 building details featured.

AmeetsA (Architecture meets Art) is a charity event which raises funds for Inspire Me, part of Enable Scotland. Architects and artists are invited to submit artwork that is auctioned for the charity at a gala event, which this year is taking place at The Corinthian in Glasgow city centre, on 10th September 2015.

The artist theme for this year’s edition was “Scotland Reinvented.”

Following the brief, I created a fantasy building using 14 different architectural locations with 21 features taken from these selected buildings around Glasgow.

The collage focusses on the multicultural diversity of the cities architecture.
The buildings include Glasgow City Chambers, Glasgow Central Mosque, Glasgow Cathedral, St Andrews Cathedral, Garnethill Synagogue, Central Gurdwara and the former Templetons Carpet Mill at Glasgow Green. There are also windows from the Glasgow tenements represented, which were photographed in Hillhead and Dowanhill.

A print of the collage, mounted and framed, from a limited edition of 200, will be auctioned at the gala dinner. 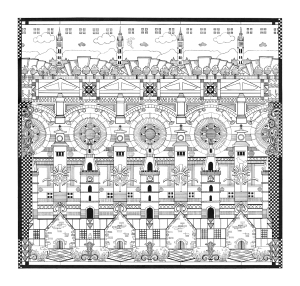 A print of this pen and ink drawing called “Glasgow Landscape” is also to be auctioned at the AmeetsA gala evening. The print has since been hand painted in several areas to highlight the landmarks featured.
This illustration features many of Glasgow’s well known landmarks and also includes a wally close tile, The Campsie Hills and Dumgoyne, a flock of starlings, symbols from Glasgow’s Coat of Arms and the city centre’s newest pedestrian bridge.